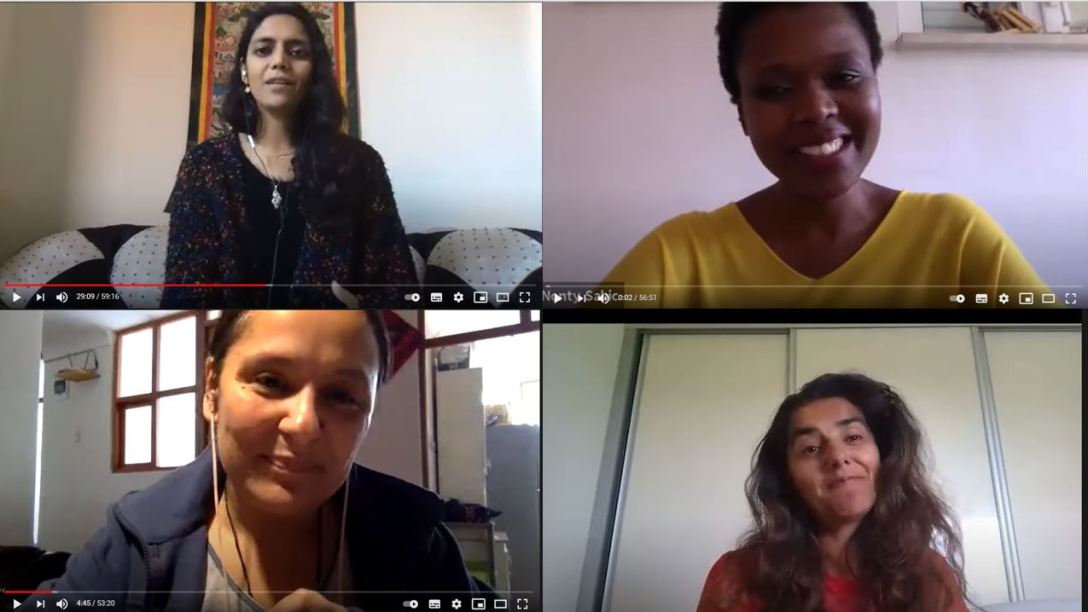 When talking about the climate crisis, it is jarring to hear an invitation to be horrified, feel helpless, and sit with the pain, when the dominant response in Western culture is to look away, or adopt greener lifestyle changes while faithfully waiting for technology to rescue us.

In their interviews last year with Dr. Jem Bendell, four educators and activists— Dr. Vanessa Andreotti, Skeena Rathor, Amisha Ghadiali, and Nonty Sabic—suggest we learn how to respond to the climate tragedy from people who have experienced trauma, oppression, and discrimination. More of us in the Global North are moving into a position similar to that of many indigenous peoples when Europeans landed on their shores with guns and diseases: our familiar world is about to crumble and we cannot stop the change from coming. Millions of people in the Global South are already suffering from climate change, with warming temperatures and unpredictable weather patterns driving economic hardship, food insecurity, and migration. And it is going to get worse. Even in the West, where people like me still remain largely sheltered from the worst effects, “people are looking for ways of addressing the anxiety and depression of dealing with the imminent end of the world as we know it,” says Dr. Vanessa Andreotti, Canada Research Chair in Race, Inequalities and Global Change. She spoke from Peru, where she works with local indigenous communities. Some of these communities live, and even manage to thrive, in conditions that affluent westerners would define as breakdown—i.e. without access to supermarkets, gas stations, banks, the energy grid, tap water, and treated sewage.

This talk of breakdown contrasts sharply with mainstream media articles, policy recommendations, and books on the subject of the climate crisis that keep assuring us we have 10 years to radically remake the global economy and prevent global temperatures from rising by more than two degrees Celsius this century. The mainstream environmental movement sticks to the founding myth of our civilization—a progress story which promises the future will be a better version of today, that our technological ingenuity and managerial skills will save us. Anyone who questions this story is labelled a purveyor of despair and disengagement—a doomer. But none of these four women interviewed could be accused of turning away from engaging with the world or abandoning climate activism.

Their activism does not fit a familiar mold; instead of sharing anger, assigning blame, or seeking justice, these women focus on healing. They invite us to search for a new way of being. Skeena Rathor’s understanding that the climate crisis is beyond our control happened at a public event in the UK, co-organized by Jem Bendell, and it was “a huge emotional, physical experience—and intellectual experience as well… I was in deep shock. I was shaking for days. And as a trauma therapist, I knew what that meant. I knew what to do with it. I sat with it and transformed it. And I’m still transforming it. We all are.”  This experience focused and redirected Skeena Rathor’s efforts, and she went on to co-found the climate and ecological campaign organization Extinction Rebellion. Since then, her “passion has been about creating space for new discovery, vision—articulation of the story of who we are and the story of becoming that we are longing for.”

Through their very different journeys, all four women have arrived at the shared understanding that the root cause of the climate tragedy is the story of separation: our distancing from the Earth, from each other, from self, and from the truth. “How do we walk back into the center?” asks Nonty Sabic, a teacher from South Africa who runs race and diversity trainings, and lives the philosophy of Ubuntu. “How do we go back into that center where we are having the awareness of reconnecting to each other? Where we are having the awareness of really working with the Earth and respecting the Earth? …For me, it’s this dream of seeing that we remember that we are a human race.”

For thousands of years, the illusion of separation has permitted many of us to oppress perceived “others” and plunder the Earth, and we are still mostly blind to this alienation today. People in the culture I inhabit seem to live in denial of why our civilization is about to fall, in denial of the limits of the planet, in denial of our entanglement with each other and the Earth, and in denial of the magnitude of the problem. But not everyone is so blindsided. Dr. Vanessa Andreotti was speaking with Jem as a Holding Group member of the Deep Adaptation Forum. According to her, the indigenous communities she works with share an understanding that the “white people’s house of modernity” is going to collapse. It has been built on the backs of indigenous and oppressed communities, it depends on extraction and expropriation, and it’s exceeding the limits of the planet. Tragically, as it falls, it will land on the backs of the exploited first.

How can we live in a house that’s falling down? How do we bear this news and not run away or stay frozen in despair? It is a dire and urgent situation, which brings up unconscious fears and insecurities. We sense it and we see it in the West; it manifests in increasing polarization, in growing isolationist tendencies, and in a mental health crisis. But by succumbing to fears we would be inviting violence. Our best hope lies in healing the divisions and separation that has brought us to this brink of chaos. Indigenous communities are acutely aware of this danger.  They seek to avert it by inviting strangers into their communities, into processes of cleansing and healing.  Through ceremonies, entheogenic practices, dances, and other rituals, they seek to help people recover their exiled feelings and sentience. The hope is that the beneficiaries of the healing rituals would cleanse themselves and be of service to others in their own communities, and not just consume the sacred experiences to augment their creativity or functionality within the broken system.

In our everyday lives we can start healing by connecting with our intuition, by allowing ourselves to be uncomfortable, open, and vulnerable in front of others, and by recognizing that we are all connected. “If people showed up to work as a father, as a brother, as a friend, as all of those aspects of how they might be in other parts of their lives rather than as an employee that makes decisions based on a certain set of criteria—if we were allowed to bring those things together, we would just make different decisions,” says Amisha Ghadiali, who hosts the podcast “The Future is Beautiful”. “We are all part of the unfolding story. And whatever it is that we spend our time, our money, and our energy on is creating the future, whether we understand that or not.”

A common thread in these four conversations is that healing needs to be an inclusive process. A fellow member of the Holding Group of the Deep Adaptation Forum, Skeena Rathor stresses that it is important that we move away from an “anti” and “de” stance, which is a reactive space that stems from a separation paradigm, “and start articulating in words, in our body, and in our expressions of how we show up as humans… How do we step into something that speaks to the most free, most beautiful, truest place in us and describe that?”

Even the concept of justice does not reflect what’s needed. Dr. Vanessa Andreotti proposes we look at ourselves as “part of this metabolic organism that we have forgotten about… If we’re all in the same metabolism, then we are all complicit with the metabolism being sick. We’re all sick.” This metabolism encompasses us, soil, animals, trees, forests, and so on. This bio intelligence can speak through us once we are de-cluttered and healed.  The required healing work is neither pleasant nor pretty. Dr. Vanessa Andreotti compares it to “composting shit”. It requires doing what is needed rather than what we want to do. It starts with an “invitation to shed your arrogance and poop your vanity….And it’s really important to remember that if we’re going to be one, we are one with the flowers, the whales, the sun and the moon, but also with the violence and the shit. That is what is necessary to remember.”

Skeena Rathor calls this work co-liberation, which “understands that your safety depends on mine and mine on yours, as does my flourishing.”  In her opinion, the environmental movement has failed to reach people through calculated rational arguments and sets of figures such as carbon sequestration, technological solutions, and mitigation possibilities.  She talks about shifting from trying to change people’s mindset to focusing on what she calls our “heart-set”. She compares this shift to an initiation, an end of life diagnosis or a near death experience that changes what it means to be alive. “Nothing less is going to do. And it’s not a policy, or a particular style of politicking, or an economic restart. It’s a shift in something much deeper in the human psyche.” She adds, “I’m ready not to be scared. I feel I’m personally in a place of self-annihilation in terms of my old being, and I’m in a pretty fearless state right now.”

Away from the debates on climate and environment that are framed and dominated by the interests of corporations and elites, these four women point to the existence of a different environmentalism. Freed from the green growth delusions of modernity, it is an environmentalism both from and for the majority of life on Earth. I am grateful to have been awakened to it.

Simona Vaitkute appears in the short film Oskar’s Quest, which chronicles the journey of her son, then 13 years old, as they grapple with the latest information on the ecological and climate crisis. The film featured in the World Community Virtual Film Festival 2021. Simona co-organised the Anyksciai Forest Festival in Lithuania, where she interviewed Jem Bendell about Deep Adaptation.

Jem Bendell will be starting the Deep Adaptation Q&As again in June 2021, with a focus on how people are bridging their personal anticipation of societal disruption and collapse with their work as professionals in various types of work. The Q&As feature more Deep Adaptation Forum (DAF) Holding Group members Shu Liang, Asiya Odugleh-Kolev and Malika Virah-Sawmy. A summary of his 2019 and 2020 series of conversations is available at St Ethelburgas.

The Deep Adaptation Forum is crowd-funding until the end of March 2021. If you can contribute something, please visit here.

See the video interview with Vanessa Andreotti or read the full transcript.

See the video interview with Skeena Rathor or read the full transcript.

See the video interview with Nonty Sabic or read the full transcript.

See the video interview with Amisha Ghadiali or read the full transcript.