In a schoolboy error the BBC confused J Nehru with MK Gandhi on its homepage today.  A screen shot follows below. In its “Fact of the Day” it says:

Gandhi’s father was State Prime Minister of Porbander in India. Two years before he died, when Gandhi was 13, he married him off to a 14-year-old girl.

Ms Indira Gandhi was speaking of her father Jawaharlal Nehru. The juxtaposition of the two statements on the BBC suggests they see a relation between the two Gandhis. 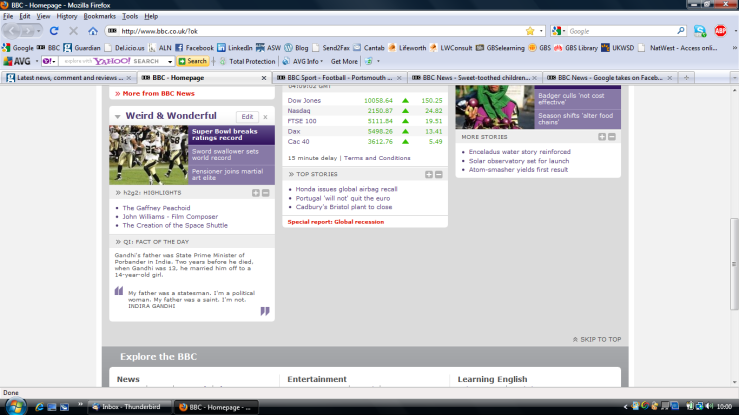 While it’s good to see MK Gandhi mentioned on the BBC, it’s a pity its done with such sloppiness. It’s not uncommon for famous names to be mentioned and their lives and insights into life just assumed. So many people like to quote Adam Smith in defence of current forms of capitalism, without any knowledge of his writings about the role of values and the importance of up-close ownership and face-to-face accountability through the market. Even in India the life and work of MK Gandhi is not looked at very closely, and his own views on economic life are ignored or mis-interpreted. For instance, Gandhi wrote about “economic trusteeship” being his view of how capitalism should operate. Today those few business leaders who have heard of that concept consider it means a paternalistic responsibility to employees and communities. Yet it does not – it demands accountability of those who control assets to those who are affected by that form of control. Otherwise, property rights should be revoked. It is therefore a concept of capital democracy. I develop this in the latest Lifeworth review of corporate responsibility, called Capitalism in Question. I quote from it:

“Indian independence leader, Mohandas K Gandhi, articulated a concept of ‘trusteeship’ in some of his writings. This arose from his view that everything is owned by everyone, and wealth is owned by those who generate it. Thus the one who controls an asset is not an owner but a trustee, being given control of that asset by society. Gandhi wrote “I am inviting those people who consider themselves as owners today to act as trustees, i.e., owners, not in their own right, but owners in the right of those whom they have exploited.”1 In the Harijan paper his views on trusteeship of property were later documented to clarify “It does not recognize any right of private ownership of property except so far as it may be permitted by society for its own welfare” and “under State-regulated trusteeship, an individual will not be free to hold or use his wealth for selfish satisfaction or in disregard of the interests of society.” He also wrote that “for the present owners of wealth… they will be allowed to retain the stewardship of their possessions and to use their talent, to increase the wealth, not for their own sakes, but for the sake of the nation and, therefore, without exploitation.”2 Gandhi did not develop these ideas further, as he had other preoccupations, such as generating economic self-sufficiency, inter-communal understanding, and the non-violent expulsion of the British Empire. The concept there remains to be developed and applied further.”

If people are now even confusing Nehru with Gandhi, perhaps it really is time for another look at some of the great leaders and thinkers of the past century, and what they might tell us about the future of our societies.

5 thoughts on “BBC implies in its “Fact of the Day”, that Indira Gandhi and Mahatma Gandhi were related!”

This site uses Akismet to reduce spam. Learn how your comment data is processed.